Re-coloring the grey spaces: A "Lilac and Her Light" Game Review

Howdy folks! How is it all going? Hopefully good. So I recently managed to set aside some time to complete a game (as if I never have time for it XD), and write a review of it. This time, its going to be a brief review of a game I finished in less than an hour. This is a review of Lilac and Her Light!

Lilac and Her Light is a game developed by Npckc and was released back in October 2018. Its a story based pixelated game(one of my favorite types!) or you can say that its an RPG/Role playing games. You can download it through the Play Store or the developer's website (I'll drop the link below later). The game is pretty small, only around 16 Mb, meaning its practically accessible with phones nowadays.

At the start, we will find ourselves playing as a girl, named Lilac, who lives in an extraordinary grey house, in which every house hold items and Lilac herself are also grey. We soon learn that she has an odd condition where everything that made contact with her would lose its color and turn grey. Hence, she isolated herself and spends every day just laying and killing time in her house. But it all changed, after an unexpected guess suddenly arrives.  A witch named Chime comes during the witching hour and offers Lilac her assistance to end her isolation. From there, we will embark on a quick adventure of gathering materials, traveling the town, and sightseeing. 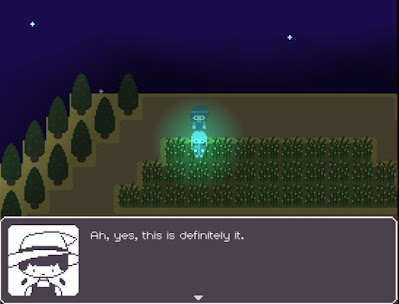 The gameplay follows a typical story based RPG games, where you will go around places gathering items and interacting with other characters. One of the things that stood out from this game to me is the length/play time, as it only took me less then 30 minutes to complete it. Aside from that, there are also some artworks that appear after certain parts of the game(which I actually find neat). As for the theme, I found it fine as it goes well with the game, regardless of what stage or moment you're in, pretty versatile I would say. Oh, another I would add is to fiddle with your device's brightness as it would help you go through the game XD.

In spite of the brief experience it offered, I still enjoy it nonetheless. The story is what actually entice me to finish it in one go, that and the theme(oh, don't forget my epiphany towards this kind of games!). In fact, I do believe that its better off this way, for the story to be placed within this narrow timeframe rather than overextending it. Sure, it is not IB nor it is not Alice's Spiritual Judge but that's exactly what set this game apart. So all in all, I give this game an 8.5/10. I can't wait to see and play more games from Npckc, looking forward to seeing more games from you! As for you fellow readers, you can go check the Play Store for it or if you're interested, you can go to their website and see their latest project!

So there goes of what I have now. I'll see you around later and until then, take care, folks! Thanks for stopping by!

Januari 17, 2021
Guess who's finally back! Finally after my 1st semester ended, I managed to find some time to write for this blog and hey, consider it as a way to start off this year with this blog. So here, I'm bringing you another game review, one that was played on my new phone as the previous one (the J4) was broken beyond repair. Without further ado, let's get started! Yup, the game that's being reviewed now is Alice's Spiritual Judge ! It's a game developed by ESC-APE by SEEL, the same developer of The Prison Boys (a game similar to this and one I really recommend you to play) and it is available now in the Play store. The game was released back in July 13th 2020. Just like its previous projects, this game can be considered as one of the visual novels type. Basically you will be playing within a story/plot while being presented the dialogues and offered the choices for your next course of action. The Storyline: In this game, you will be playing as a girl known as Alice Ka
Posting Komentar
Baca selengkapnya

From a Man to a Mouse! Mousebusters Game Review

Oktober 01, 2020
Hello there! I'm finally back after months of exhausting preparation for my university entrance exam and boy! All of those online try outs and tiring nights of studying finally paid off! Now I'm a university student and by that I just signed myself up for another new series of routines, basically its school 2.0. After I was done with the univ orientation, I finally came up with a new post, another game review, this time I'm bringing you a review of Mousebusters! Mousebusters is a game developed by Odencat, the same developer of Clock of Atonement, Bear's Restaurant, and many other games they made. This game was released on September 10th 2020 and has been hinted since June or so. This game, like other games by Odencat, is based on the touch and interact gameplay where players will be offered objectives/things to do through the dialogues and move around by taping the screen. Without further ado let's get into the review! For the story, this game tells  a story of a t
Posting Komentar
Baca selengkapnya

Game Review! The Town of Tides

Maret 16, 2020
Hey there! It's been a while and I have just the right alibi! The past three months have been very intense. Not a week was passed without a wave of tryouts or exams, considering it's my final year of high school. Another thing is that my schedule is so tight and filled, I just didn't have the time for my hobby, as for the most part, I resorted to games to reduce my stress instead of more productive yet refreshing activities. Not only that but the recent virus breakout, the notorious COVID-19 had made his way to Indonesia, which (un)fortunately gave the whole school a temporary quarantine for over 2 weeks! Hence, now I have the time to write something here. Enough with the background, now let's get into the business. So here, I'm bringing you another review of a game I recently finished. It's another good old pixelated RPG game, the name is "The Town of Tides". The game was developed by Odencat and was released in the mid of 2018. Just like any oth
Posting Komentar
Baca selengkapnya